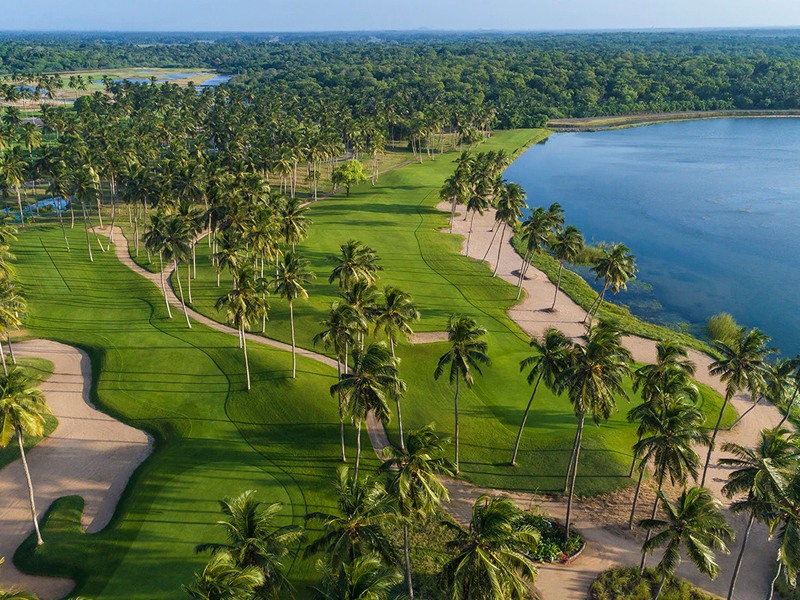 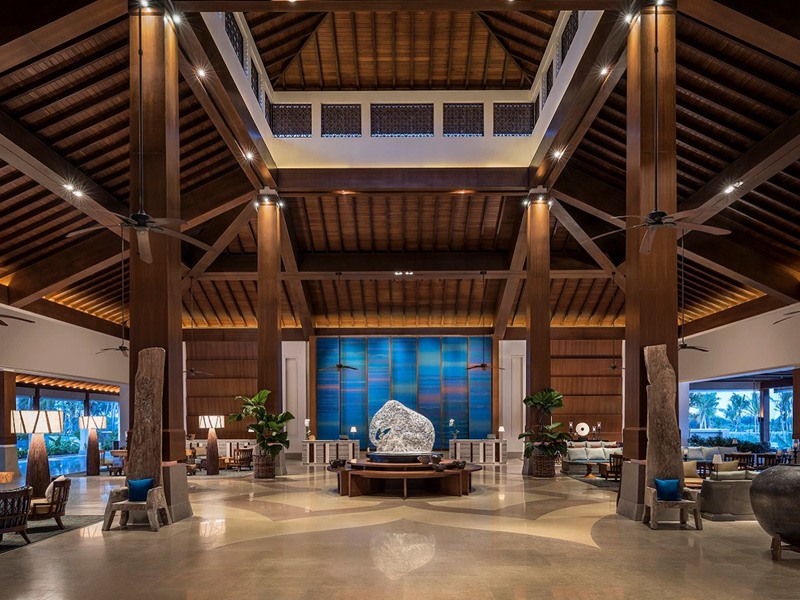 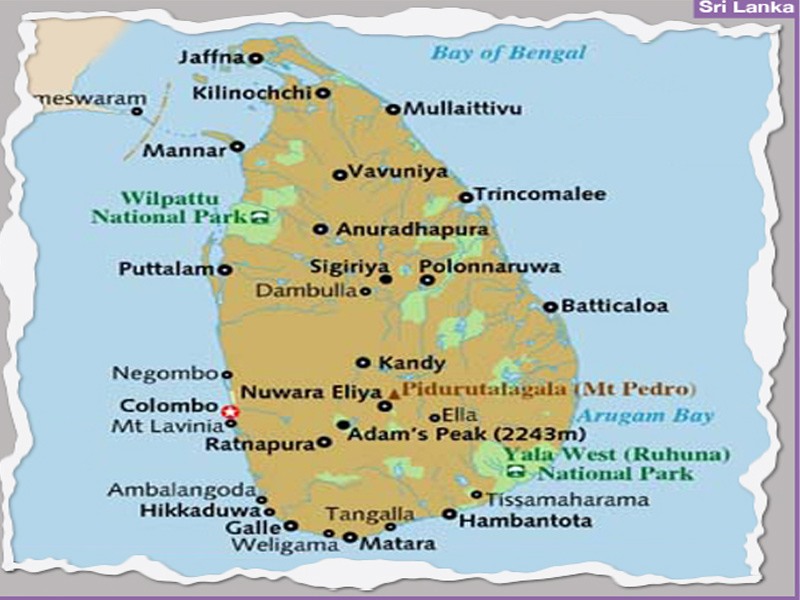 DISCOVER MORE ABOUT THIS GOLF HOLIDAY

To enrich your appreciation of this golfing holiday we have provided below information on your accommodation, the course and some of places and attractions you can visit and see in your free time or if you wish to extend your holiday.

The luxury resort spans 58 hectares, making it the largest in Sri Lanka, and the beachfront location is an adventurer’s dream, with a mosaic of activities and unique curated expeditions to help you absorb the diversity of the island at its best.

Play at the first and only resort golf course in Sri Lanka, for a memorable golfing experience with spectacular views of the Indian Ocean. Designed by world-renowned golf architect, Rodney Wright, the 18-hole golf course spreads across a vast coconut palm plantation, a sapphire quarry, lakes and sand dunes, offering distinctive challenges for both beginners and seasoned players.

Unparalleled recreational activities make this resort ideal for a golfing holiday. Experience the thrills of a 7-metre high trapeze, an outdoor water park and many more fun-filled activities. The resort also offers 3 swimming pools and a health club. If you seek relaxation, Chi Ayurveda Spa is a place of personal peace that offers ancient healing therapies and personalized Ayurveda consultations with the resident expert doctor.

The unique Artisan Village gives you an opportunity to explore and interact with local artists and craftsmen. The Village is a space dedicated to supporting and preserving the treasures of southern Sri Lanka’s artisan communities, and comes alive with regular traditional dance and music performances in the evening.

Take a gastronomic stroll across the vibrant dining destinations. Indulge in the finest Sri Lankan cuisine at Bojunhala, take in the South East Asian flavours, inspired by the famous hawker stalls, at Sera, enjoy international fare in a lush, green setting, at Ulpatha, the resort’s Golf Club House, and cap off the day with a sundowner at Gimanhala Lounge, offering specially crafted cocktails and magnificent views of the Indian Ocean.

Designed by world-renowned golf architect, Rodney Wright, the 18-hole golf course spreads across a vast coconut palm plantation, a sapphire quarry, lakes and sand dunes, offering distinctive challenges for both beginners and seasoned players. The abundance of nature and wildlife, framed by lakes and the beautiful Indian Ocean, sets the scene for an incredible golfing experience.

The clubhouse overlooks the 18th green and welcomes all golfers and guests. Inspired by Sri Lanka’s colonial heritage, Ulpatha (watering hole) is the right place to unwind after a game of golf, with a fine selection of beers, malt whiskies, cocktails and other beverages and snacks. It serves international fare and comfort food, for a relaxed lunch in cool settings overlooking the golf course. There’s a pool table
and a TV to catch up on other sports.

A wide range of products are available from the ro Shop with a selection of premium golf equipment, caps, polos, shoes and sun glasses, for total comfort and elegance. You can also hire sets of clubs and shoes and there is a locker room with changing and shower facilities.

Regular golf attire is required: shirts with collars, tailored trousers and Bermuda shorts. No denims, beach wear, tennis wear or training shoes are permitted on the golf course at any time. Golf shoes with soft spikes are compulsory on the golf course.

There will be plenty of time during your stay to soak up the sights, sounds and tastes of the ‘Spice Island’. Below we have picked out some of the more notable places to visit and we can arrange to include these in your holiday. We can also offer suggestions if you have any particular interests  or wish to take part in any activities (other than golf of course)

Anuradhapura
The first capital of ancient Sri Lanka, its stunning rock carvings, temples, giant stone pillars, landscaped pleasure gardens, vast irrigation lakes and places of religious worship have made this one of the world’s major archaeological sites and a UNESCO World Heritage site.

Badulla
Site of the ancient Buddhist temple of Muthiyangana Raja Maha Vihara , one of the sixteen sacred places in Sri Lanka, this is one of Sri Lanka’s oldest towns. Nearby are the Dunhinda Falls, a 2,000-year-old rock temple and one of the oldest surviving wooden bridges in the country.

Colombo
The commercial capital of Sri Lanka, the city still retains its colonial garden roots with shady tree-lined boulevards and grand old mansions alongside the noisy bazaars, department stores, a vibrant nightlife and an array of dining experiences.

Dambulla
Famed for its Royal Rock Temple, this cave monastery has been a sacred pilgrimage site for 22 centuries and is the largest, best-preserved cave-temple complex in Sri Lanka which includes the 15 meter long sculpture of the dying Buddha.

Galle
Considered to be the most perfectly preserved colonial town in Sri Lanka, the streets around the historic Fort in the old Dutch town, a Unesco World Heritage Site, are full of little boutique shops, cafes and hotels owned by local and foreign artists, writers, photographers, designers and poets.

Hortons Plains National Park
Located on the highest plateau on the island, the cloud forests are rich in endemic plants and and once there you should visit “Worlds End”, a 4000 feet straight vertical drop and Bakers Falls noted for the tremendous noise created by water pounding the large rock formation at its foot.

Jaffna
The northern capital of Sri Lanka is the centre of Sri Lankan Tamil culture and is quite different to anywhere else in Sri Lanka. Many streets are dotted with large Hindu temples and churches while the hot springs at Keerimalai and the Point Pedro Lighthouse are other popular places to visit .

Kandy
The hill capital and last stronghold of Sinhala kings against the British Empire is steeped in tradition and architectural delights and is the location of the most sacred of all Buddhist shrines – the temple of the Sacred Tooth Relic of the Buddha.

Kataragama
The extensive collection of shrines and temples is and considered one of the holiest sites on the island being held sacred by Buddhists, Hindus and Muslims alike. Pilgrims come all year round to worship at the shrine of the god Kataragama.

Mihintale
This mountain peak near Anuradhapura is believed to be the site of a meeting between the Buddhist monk Mahinda and King Devanampiya Tissa in 247 BC which inaugurated the presence of Buddhism in Sri Lanka and in June there is a great festival, the Poson Poya, held on the full-moon night.

Mirissa
This little village with its crescent shaped beach blanketed with coconut trees is one of the safest beaches along the southern coast and has now found fame as the whale-watching capital of Sri Lanka where Dondra Head is one of the best places to see these magnificent creatures.

Mulgirigalla
Sri Lanka’s finest southern ancient monument, the seven, beautifully decorated ancient cave temples are carved out of the flanks of an enormous rock outcrop and are connected by paved granite paths and around 500 steps up to the Dagoba Terrace with wonderful views of the surrounding area.

Negombo
A delightful coastal town with a lively fish market, colourful wooden boats and old world colonial charm where the wide beach is the backdrop to the busy resort area and the Negombo lagoon with over 190 species of wildlife and birds in the mangroves.

Nuwara Eliya
Also known as “Little England” this was the favourite hill station of the British. The mountains surrounding Nuwara Eliya are a carpet of tea bushes and the whole process of tea manufacturing, from green leaf to the fragrant contents of a packet of Ceylon Tea, can be watched at many of the tea factories in the area.

Pinnawala Elephant Reserve
Established in 1975 as an orphanage, nursery and captive breeding ground for wild Asian elephants it has the largest herd of captive elephants in the world and is where abandoned & maimed elephants are cared for in idyllic surroundings.

Polonnaruwa
Amongst its plethora of ruins and places of religious worship are the famous Moonstones, the unique rock carvings found at the entrances or at the foot of stairways in temples, shrines, dagobas and very important buildings.

Sigiriya
The magnificent rock fortress built in the 5th century AD has been named as a world heritage site is world-renowned for its ‘Mirror Wall’ and is the best-preserved city centre in Asia from the first millennium.

Tissamaharama
Home to a string of remarkable historic buildings including the 55.8 metre high Tissa Dagoba, which stands majestically against the backdrop of the night sky and Tissa Wewa, a magnificent man-made reservoir with its wonderful bird life that provides the scenic backdrop for the town.

Wilpattu National Park
The unique feature of this park is the existence of natural, sand-rimmed water basins or depressions that fill with rainwater and it is the largest and one of the oldest National Parks in Sri Lanka with sixty lakes.

Yala National Park
This has the world’s highest concentration of leopards and whilst much of the nature reserve is parkland, it also includes jungle, beaches, freshwater lakes, rivers and scrubland making it home to a wide diversity of wildlife.

Nuwara Eliya Golf Club
Founded and constructed in 1889 the course is situated at the foot of Mount Piduruthalagala which provides a spectacular backdrop. This 18 hole, 6075 yard long, par 70 course, is approximately 6,000 feet above sea level.

Royal Colombo Golf Club
Founded in 1880 this 18 hole, 5770 yard long, par 71 course is the oldest golf club in Sri Lanka and second oldest Royal Golf Club outside the UK. It also has a magnificent verandah that wraps around the main bar.

Victoria Golf Course, Kandy
The 18 hole, 6945 yard long, par 73 course with narrow tree lined fairways is set in over 517 acres of lush green land and was designed by renowned golf-course architect Donald Steel in 1997 and opened in 1999.